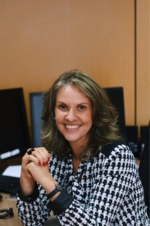 Leany Lemos was the Secretary of Budget, Planning and Management for the Federal District, Brasilia, Brazil, from 2015-2018. As Secretary, she managed an annual budget of USD 13 billion, during the worst recession in Brazilian history. Before holding this assignment, she was a senior official in the Federal Senate for over 20 years, serving as Committee Director and Chief of Staff of a number of senators.
Leany Lemos holds a Masters in Political Science (1998) and a Doctorate in Comparative Studies on the Americas (2005), both granted by the University of Brasilia, Brazil. She was an APSA/Fullbright Congressional Fellow (2003-2004); Visiting Scholar at Georgetown University (2003-2004); Visiting Research Associate at the Centre for Brazilian Studies University of Oxford (2006); and was a Post-Doctoral Fellow at the Oxford-Princeton Global Leaders Programme (2009-2011).
Her dissertation “Legislative Control in Presidential Democracies: Brazil and United States in Comparative Perspective” won the Best Doctoral Dissertation Prize 2005-2006, awarded by the Latin American Political Science Association (ALACIP), and Honor Mention at the 2006 Great Prize of Doctoral Dissertation by CAPES, the Brazilian Agency for Higher Education and Research. She is also Professor at the Institute of Public Law (IDP), Brasilia, at the Master in Public Administration Programme.
Leany Lemos has just left the Secretary of Planning, Budget and Management to become pre-candidate for the Brazilian Senate in 2018 elections, running through the Brazilian Socialist Party (PSB).